Press Releases
The Hiring Outlook for the Second Quarter is the Best in a Decade, According to CareerBuilder's Latest Forecast

CHICAGO and ATLANTA, April 7, 2017 /PRNewswire/ -- Forty-five percent of U.S. employers plan to hire full-time, permanent employees in the second quarter – a significant jump from 34 percent last year and the highest percentage for the quarter dating back to 2007, according to CareerBuilder's latest forecast. Temporary hiring is also expected to experience a double-digit boost year-over-year with nearly half of employers (49 percent) planning to add temporary or contract workers over the next three months. 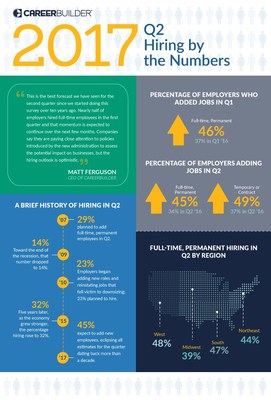 The national survey was conducted online on behalf of CareerBuilder by Harris Poll between February 16 and March 9, 2017. It included a representative sample of more than 2,300 hiring managers and human resource professionals across industries and company sizes in the private sector.

"This is the best forecast we have seen for the second quarter since we started doing this survey more than ten years ago," said Matt Ferguson, CEO of CareerBuilder and co-author of The Talent Equation. "Nearly half of employers hired full-time employees in the first quarter and that momentum is expected to continue over the next few months. Companies say they are paying close attention to policies introduced by the new administration to assess the potential impact on businesses, but the hiring outlook is optimistic."

Full-time, Permanent Hiring in Q1
A greater sense of confidence among employers was already evident in the first three months of the year. Forty-six percent of employers reported that they increased their number of full-time, permanent employees in the first quarter, outperforming the same period in 2016 by 9 percentage points. It is also the highest percentage reported for the quarter dating back to 2007. Eight percent decreased headcount in Q1 2017, a slight change from 9 percent last year, while 46 percent reported no change in headcount and 1 percent was unsure.

Full-time, Permanent Hiring in Q2 – A Brief History
Looking over the last several years, the hiring outlook for the second quarter has steadily improved, with the biggest year-over-year gains occurring between 2009 and 2010 and between 2016 and 2017:

Temporary Hiring in Q2 2017
The addition of temporary hires will continue to be strong going into the second quarter. Forty-nine percent of employers expect to hire temporary or contract workers over the next three months, up 12 percentage points from 37 percent last year and nearly double the percentage (26 percent) in 2011, when the statistic was initially tracked post-recession.

Hiring by Region
Comparing regions, the West houses the largest percentages of employers expecting to add full-time, permanent employees (48 percent) and temporary or contract employees (54 percent) in the second quarter. The South and Northeast are following closely behind while the Midwest continues to trail other regions by a larger margin – though the Midwest is showing notable improvement compared to last year.

Survey Methodology
This survey was conducted online within the U.S. by Harris Poll on behalf of CareerBuilder among 2,380 hiring and human resource managers (employed full-time, not self-employed, non-government) between February 16 and March 9, 2017 (percentages for some questions are based on a subset, based on their responses to certain questions). With a pure probability sample of 2,186, one could say with a 95 percent probability that the overall results have a sampling error of +/- 2.01 percentage points. Sampling error for data from sub-samples is higher and varies.